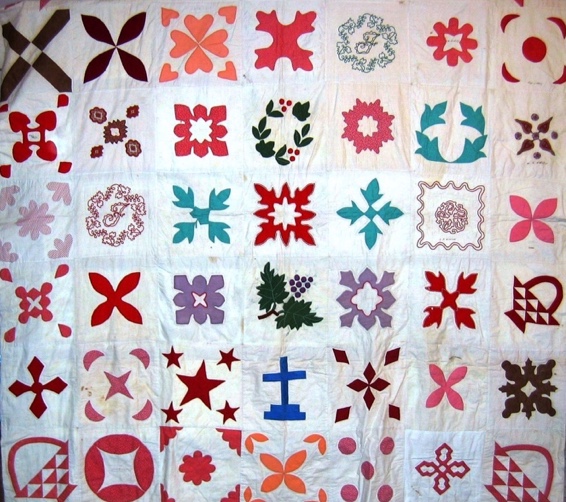 Harriet Trefethen Skillings (1821-1903) was a remarkable and energetic woman.  She managed a large family, kept boarders year-round, and developed a summer colony on her shorefront island property — all while taking an active interest in her neighbors and community affairs on Peaks Island. 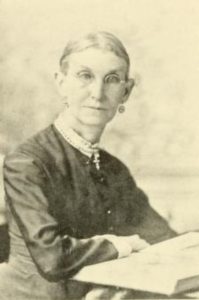 Harriet Trefethen Skillings was president of the Sewing Circle
when the quilts were made, and the parsonage project completed.

The Skillings were island hoppers. Born on Monhegan Island, Harriet moved to House Island when she was a young child. She married Robert F. Skillings (1819-1902) of Cushings Island, and they eventually had nine children together. The young couple settled on Peaks Island and shared the Trefethen Homestead with Harriet’s brother, William Trefethen, and his new wife, Emily Reed.

Robert was instrumental in bringing the first church to Peaks Island (what is now New Brackett Church). In 1873, Harriet helped reincorporate the Peaks Island Sewing Circle, founded in 1856, as a charitable organization. The Sewing Circle adopted a constitution and bylaws and elected officers, with the express purpose of purchasing a parcel of land and building a parsonage to house the church pastor and his family, who was then sharing a small house with another family. The parsonage would belong to the Sewing Circle, and they would lease it to the church.

As part of this fundraising effort, the Sewing Circle made and auctioned two signature quilts. People donated money to inscribe their name on a square, and the finished quilts were auctioned off to the highest bidders. It took about five weeks to finish the quilts in April and May 1875. 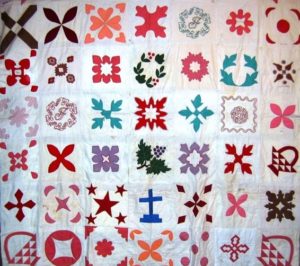 The signature quilt made by the Peaks Island Sewing Circle in 1875.

By February 1876, the parsonage was complete. “The building which we have constructed is 23 ft. wide by 32 ft. long” Henry Trefethen Jr. wrote, “consisting of a kitchen, sitting room, one bedroom, stove room, two closets and one clothespress down stairs, with three bedrooms and three clothespresses upstairs…. The cellar is blown in from a solid ledge and is as good as can be found on Peaks Island we think.” (A “clothespress” is a freestanding closet, such as an armoire.) 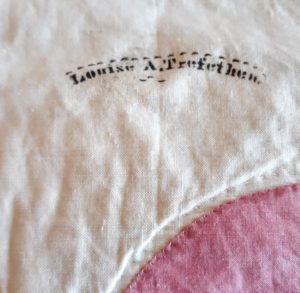 Detail of Louise A. Trefethen’s square on the signature quilt. Her name is
stenciled, rather than written by hand. Louise was from Prince Edward Island,
Canada, and her parents were born in Scotland and England. She married
Charles Trefethen in 1859, and gave birth to six children, most born on House Island.
The family moved to Peaks Island around 1871.

One of the quilts was discovered at a Massachusetts flea market in 2008, and donated to the collection of the Fifth Maine Museum. Comprised of 49 squares, there are 17 names still visible on the quilt today. The surnames Trefethen, Lane, Skillings, Scott, Fisher, McDonald, Gardner, and Craig are among those represented.

This quilt will go on exhibit at the Fifth Maine Museum for the 2023 season. Come see it in person!

Many thanks to Judy Richardson for sharing her detailed research on the Sewing Circle and the quilts.