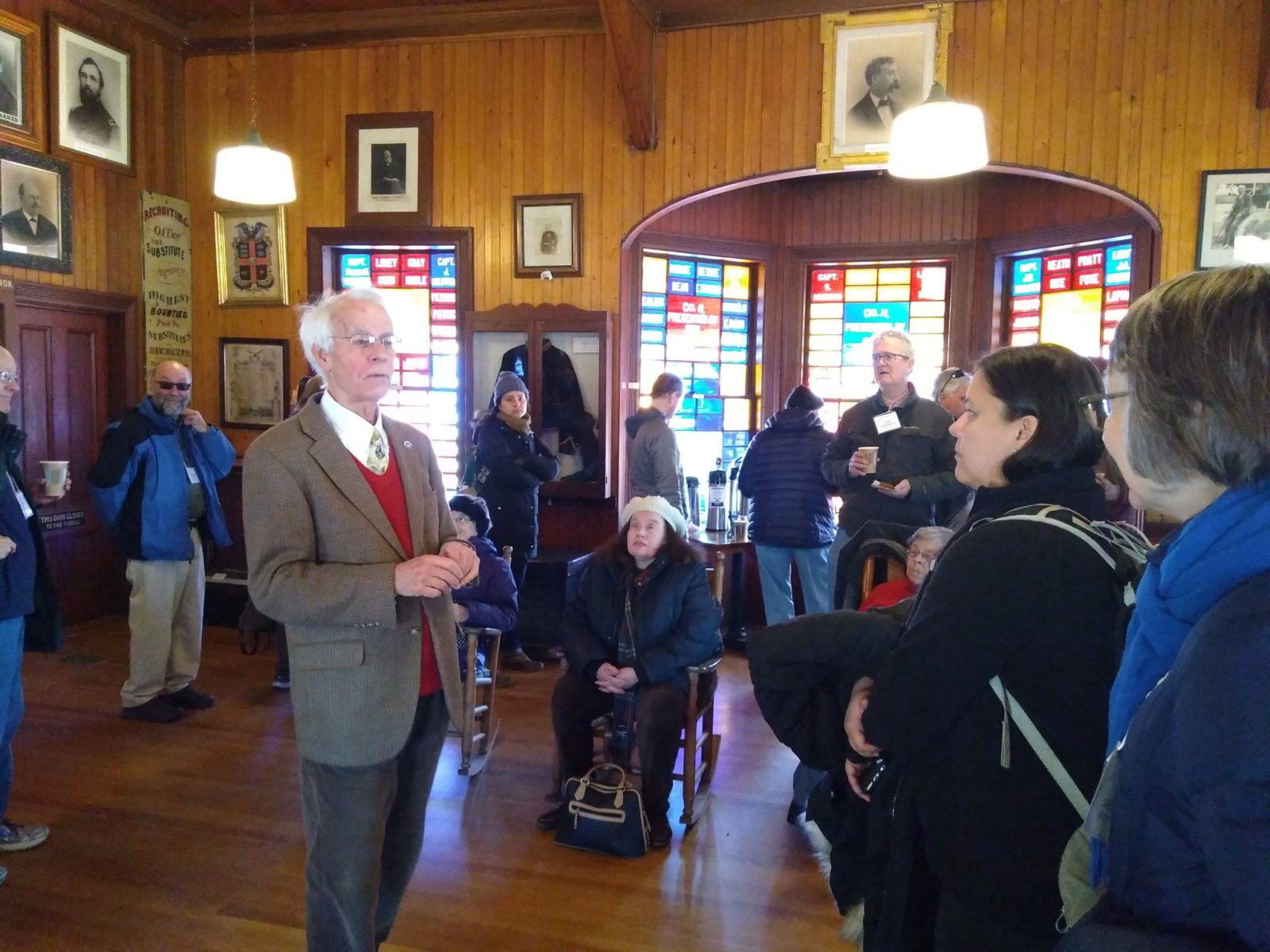 About the Fifth Maine Museum

The Civil War was the definitive experience of nineteenth century America. Even those who did not serve divided their lives into before and after “the War.”

For those who served, the effect was more profound. Nothing could have prepared them for the grisly realities of war or the soldier’s life that swung between exhausting marches, intense battles, and tedious camp life.

Little wonder then, that veterans who had endured the trials and hardship of soldiering sought each other’s company in the years afterwards. Many felt closer to their comrades in arms than they did to their own families.

The Fifth Maine Regiment Memorial Hall was built in 1888 by the veterans of the Fifth Maine Volunteer Regiment as a memorial and reunion hall. The iconic stained glass windows that honor the regiment soldiers were also a fundraising scheme to defray the cost of the building. The veterans created a quiet, almost sacred space where they gathered, reminisced, and drew comfort from each other. As time passed, the reunions grew smaller and smaller (the last one was in 1940), and the building fell into disrepair.

In 1956, The Fifth Maine Regiment building was given to the Peaks Island community by the descendants of the veterans who built it. Since then, restoration work has brought the building back to its former glory. It is an architectural gem that is now on the National Register of Historic Places.

Today, the building houses the Fifth Maine Museum, a museum that tells two intriguing and related stories: the history of Peaks Island from its days as “The Coney Island of the North” to its role in World War II, and the story of the Fifth Maine Regiment.

There are two new exhibits for 2019: Peaks Island in the 1970s: Building a Community and a photography exhibit entitled “Jealous of the Stars.”

Click on the panes to learn more about the regiment soldiers.

Joseph P. Harmon was born in 1843 and was one of the youngest members of the Harmon household (his only younger siblings were a pair of twins, three years younger than him). When the 1850 census was taken, Joseph was seven years old, living in a household with 14 people —  12 Harmons and two young male borders.

According to Bicknell’s History of the Fifth Maine Regiment, Harmon was wounded on June 28, 1862 at the battle of Gaine’s Hill. After the war, Harmon returned to Maine and boarded with the Smith family in Yarmouth, Maine. Ten years later, he was living in Weld, Maine and married to a woman named Helen J. Robertson. They had two very young daughters and two boarders living in their home at the time of the 1880 census and Harmon’s occupation is listed as “Clerk in Grocery.”

The Portland Directory for 1889-91 lists a Joseph P. Harmon living at 31 North street, with an occupation of “variety store” – ostensibly as owner, not clerk. By 1910, Harmon and his wife had returned to Weld where he appears to have lived until his death on June 30, 1931.

From an unidentified source in the Fifth Maine Museum’s files, we know that Harmon “took great pleasure in showing off his watch fob, which he claimed was made of rebel cannon.” This same source attests to Harmon’s incredible pride and love for the Fifth Maine Regiment and for the “Memorial Building on Peaks Island.”

Captain Bucknam was born around 1830, probably in Hebron, Maine (according to the 1850 census). By the 1860 census, he was boarding with the Valentine family in Minot, Maine. After the war, he apparently returned to Minot where he married a “Rachel S.” His occupation, according to the 1880 census, was farming. He died on October 14, 1909 when he was approximately 79 years old. Just 11 days later, on October 25, 1909, his widow applied for his pension.

In his October 6, 1909 letter to Captain Robert M. Stevens,  Corporal Nicholas Lougee states: “Manning and Bucknam came down and staid (sic) Sunday. Bucknam is doing very poorly, his heart bothers him a great deal, and I fear that he has made his last visit to the old place. Too bad, we shall miss the old comrade.” Indeed, Bucknam died only eight days later, but was active with the Fifth Maine Regiment Hall right up until his death.

Earlier in his life, Bucknam took an active leadership role in the Fifth Maine Regiment. A May 1, 1861 article in the Lewiston Daily Evening Journal states that, “a volunteer company has been formed at Mechanic Falls. William A. Tobie has been chosen Captain, and H. T. Bucknam Lieutenant, and a Mr. Spiller 2nd DO.”

In History of the Fifth Maine Regiment, George Bicknell write a memorable passage about the battle at Gaine’s Hill. “Comrade after comrade fell upon either side, yet there was no faltering. The enemy approaching nearer the left of our regiment than was deemed advisable by the brave Captain Buckman (sic) in command of Co. ‘K,’ he at once detached his own company, and with another, made a gallant charge upon them, driving them like sheep before his brave boys.” Bicknell also notes that Bucknam was wounded at Crampton Pass.

Image of Captain Hamlin T. Bucknam and Captain Burbank Spiller from History of the Fifth Maine Regiment by George Bicknell.

We do not know much about Lieutenant John S. French. Census information tells us that he was born around 1840 in Albion, Kennebec County, Maine, and was said to be working in Lewiston as a carpenter when he enlisted. According to the letters of his close friend, John H. Stevens, he died on November 8, 1863 at Rappahannock Station, just 23 years old. Stevens wrote home to his father after John’s death: “I cannot speak too highly of his conduct on the field or in camp. As an officer, soldier and a man, he had no superiors. In his death we all feel that we have met with a great loss – but we know that he felt like a hero.”

Frank F. Goss, born December 22, 1842, came from colonial stock. His great grandfather, Thomas Goss, came to Gloucester, Massachusetts from England in 1756. From Gloucester, the family moved to Old Danville, Maine (now part of Auburn, Maine). But Frank’s name doesn’t appear in the United States census until 1880, when he is listed as a 38-year old “Railroad Hand,” married to Abbie V.

Goss died on December 6, 1917 of Bright’s Disease (an term used at the time for various types of kidney disease) and his prominent obituary notes that he had served for 22 years as the street commissioner of Auburn, Maine. According to the same obituary, Goss served in the 1st Maine Regiment, 6th Corps, and was wounded at the Battle of Spotsylvania Court House in May of 1864.

Goss’ obituary goes on to say that he “served as treasurer for the 5th Maine Building Association of Peaks Island for many years.” His wife’s obituary sheds further light on his involvement, noting that her husband “served in the Civil War in the Fifth Me. Regiment, was at one time department commander of the G.A.R., and was much interested in the Fifth Me. Regimental building at Peaks Island.”

According to his pension record, George E. Brown served in Company H of the Fifth Maine Regiment. No notation is made on his pension application card that he served as a Captain, which is odd given that most other pension records note military rank. He died on March 10, 1913 at the age of 77 in Portland, Maine. His widow applied for a pension extension four days later, on March 14, 1913. The Fifth Maine Regiment Museum has in its archives a photo album of the Fifth Maine veterans that include mostly photos taken by George E. Brown

John McLellan was born sometime around 1840, as his military history records his enlistment as corporal on June 24, 1861 at the age of 21.

In Bicknell’s History of the Fifth Regiment Maine Volunteers, John McClellan is listed as having come from Casco. He served Company K, and was discharged from the ranks of the Fifth Maine Regiment on June 13, 1863, after being wounded at the Battle of Wilderness. He was consequently transferred, like many wounded soldiers, to the Seventh Maine Regiment.

Clark Wayland was born in Canada sometime around 1846 to parents who had both emigrated from Scotland. He was not among the original enlistees in Company C. According to Bicknell’s History of the Fifth Regiment Maine Volunteers, Wayland joined the Company on August 29, 1864. He had been transferred to the 1st Maine Veterans in June of 1864, which may signify that he was wounded in battle.

By 1880, Wayland had established a home in Gorham, New Hampshire, had married a woman named Lizze A., and was working as a machinest. Though he was still living in New Hampshire in 1900, by 1910 he had moved to Portland, Maine. In 1920, he was still in Portland and was renting a home with his wife.

When news of the attack on Fort Sumpter reached the small town of Bethel, Maine, Clark S.Edwards was high on a ladder shingling his roof. He immediately climbed down, obtained permission from the appropriate authorities to form a company of men, and set out to gather recruits from Bethel and the surrounding towns.

This group became Company I, Fifth Regiment Maine Volunteer Infantry with Edwards as its Captain. He rose through the ranks and was appointed Colonel of the regiment following the resignation of Colonel E.A. Scammon in January 1863.

Following the war Col. Edwards, who had been breveted to Brigadier General for bravery in . battle, returned to Bethel to engage in farming. In 1898 he was appointed Maine’s Commissioner to the Columbian Exposition in Chicago. In that capacity he directed the construction of the State of Maine building which now stands in Poland Spring, Maine.

General Edwards retained close ties with his comrades in the Fifth Maine, spending many a summer day at the “cottage” on Peaks Island. His comrades, in turn, eulogized him in a stirring funeral service attended by Joshua Chamberlain.

Interestingly, Horatio seems to have been counted twice in the 1860 census. He is listed in the 1860 census for Turner, Maine taken in April of 1860, as well as the Hebron 1860 census, which was conducted in July of 1860. In Hebron he is listed as a farmer, boarding with the family of Charles Newhall, owning 400 dollars of personal estate.

After the war, Horatio returned to Hebron, and the 1870 census lists him as the head of a
household with a wife named Georgina and a four-year-old son. His occupation is listed as a
farmer and a shoemaker with 800 dollars in real estate and 270 dollars in personal estate. The
Lewiston/Auburn Directory for 1872 lists him as a shoemaker with a home at 62 Union Street.
By 1880, the census lists him as a 45-year old boarder in the city of Auburn, working as a “shoe
shop hand.”

If this is true, Horatio moved to Auburn sometime between 1870 and 1872. Since the 1880
Census lists him as a boarder, it is interesting to conjecture what might have happened to his
wife and child. It seems possible that he simply lived in Lewiston/Auburn to take advantage of
the pay that the mills in Lewiston provided. There are no pension applications on file for
Horatio Bumpus, though Bicknell lists Bumpus as having been wounded on May 3 rd (no year
given) and transferred to the Veteran’s Reserve Corps.