As a young child in Alabama, Keller was afflicted with an illness (possibly scarlet fever or meningitis) that left her blind and deaf. Despite this significant setback, and with the help of her teacher and lifelong friend, Anne Sullivan, Keller learned to read and write. After an education at both specialist and mainstream schools, Keller attended Radcliffe College and became the first deaf and blind person to earn a Bachelor of Arts degree.

Keller was a prolific author, writing many books and hundreds of speeches and essays on a wide range of subjects. She advocated for those with disabilities, for women’s suffrage, labor rights, and world peace. She joined the Socialist Party of America, the International Workers of the World (aka, the IWW, known as the Wobblies, the most radical labor union at the time), and was a founding member of the American Civil Liberties Union. She could also read five languages. She toured widely, giving lectures to huge crowds. 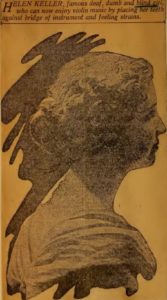 Helen Keller arrived on Peaks Island in August 1913 for a well-deserved vacation. Peaks Island was known as the “Coney Island of Maine” at the time, and attracted visitors by the thousands in the summer months, but Keller may have been drawn to the Maine coast for more personal reasons. When she was 10 years old in 1890, Helen struck up a pen pal relationship with Ethel Orr, a ten-year-old girl who lived on Bailey Island, just a few miles from Peaks by water. Ethel requested Helen’s autograph on silk for a quilt her mother was was making. The two girls struck up a friendship, which was portrayed in the children’s book Helen, Ethel & The Crazy Quilt. 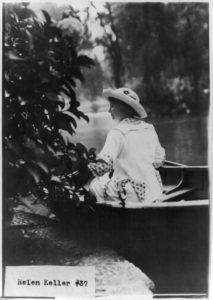 Helen Keller in a Boat by Shore, circa 1913
(courtesy of Library of Congress Prints and Photographs Division)

In 1913 she came to Peaks, one of several visits she would make to the island. Accompanied by her assistant, Ruth Moor, Helen boarded the ferry Machigonne – with its upholstered seats, plush carpets, stewardesses, and bands – for a week-long stay at the home of Professor Charles White and his sister Lucy White. The White cottage was located in an area known as Rockbound Park – now known as Tolman Heights. White was head of the New England Conservatory of Music and provided voice instruction to Helen. 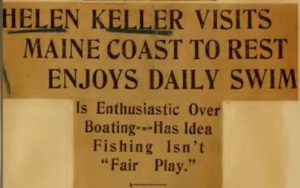 Moor described the intent of the visit as “.…to make Miss Keller forget her books and her work and to assist her in participating in all the lighter forms of diversion which a girl’s life should know….” Keller had a busy week on Peaks. She attended a dinner in her honor, entertained guests at an engagement party, went dancing and hiking, learned to cook, and went sailing.

Helen Keller seemed without fear and up for anything. She loved to swim. An incredible letter in the archive at the American Foundation for the Blind was written to Keller by Philip Sherry, and recalled their meeting on Peaks Island. Sherry wrote:

One day you and Ruth and some other girls were at a small beach near Trefethen Landing…when a friend and I came along in my canoe. At Ruth’s request we tied a rope around your waist and let you swim out a ways and back. I think you enjoyed the swim…

Sherry also recounts an evening dancing on the island:

One other fun night we all went to the Trefethen Association dance hall and you amazed folks by going on and dancing. When it came intermission time I asked you if you would like an ice cream, and without any hesitation you said yes. I told you you were the first girl I had ever asked that question who knew what she wanted and said so right off.

Keller visited Maine – and Peaks Island – for both personal and professional reasons multiple times in her life. She addressed the Maine legislature in 1939 to urge support for state services for the blind, and also visited the Maine School for the Deaf (now the Maine Educational Center for the Deaf and Hard of Hearing). She had a lifelong affection for the Maine coast.