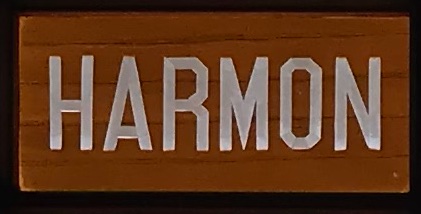 Joseph P. Harmon was born in 1843 and was one of the youngest members of the Harmon household (his only younger siblings were a pair of twins, three years younger than him). When the 1850 census was taken, Joseph was seven years old, living in a household with 14 people —  12 Harmons and two young male borders.

According to Bicknell’s History of the Fifth Maine Regiment, Harmon was wounded on June 28, 1862 at the battle of Gaine’s Hill. After the war, Harmon returned to Maine and boarded with the Smith family in Yarmouth, Maine. Ten years later, he was living in Weld, Maine and married to a woman named Helen J. Robertson. They had two very young daughters and two boarders living in their home at the time of the 1880 census and Harmon’s occupation is listed as “Clerk in Grocery.”

The Portland Directory for 1889-91 lists a Joseph P. Harmon living at 31 North street, with an occupation of “variety store” – ostensibly as owner, not clerk. By 1910, Harmon and his wife had returned to Weld where he appears to have lived until his death on June 30, 1931.

From an unidentified source in the Fifth Maine Museum’s files, we know that Harmon “took great pleasure in showing off his watch fob, which he claimed was made of rebel cannon.” This same source attests to Harmon’s incredible pride and love for the Fifth Maine Regiment and for the “Memorial Building on Peaks Island.”