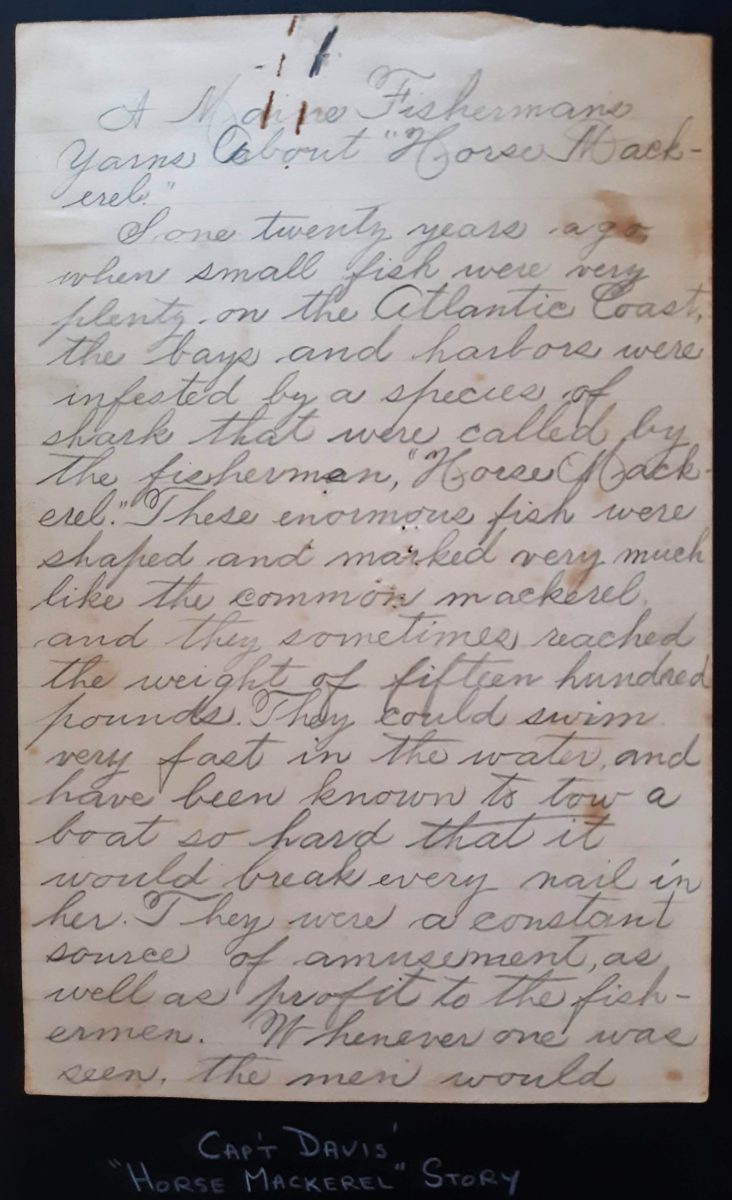 Interesting things pop up in the Fifth Maine Museum collections weekly. The most recent was a handwritten “yarn” about a fisherman’s close call with a big fish in Casco Bay.

Some context about details that appear in the story to follow: In the 1800s and early 1900s, “horse mackerel” was a vernacular term for bluefish tuna, which are indeed large, powerful fish. (There is a smaller fish also called a horse mackerel, so it’s confusing.) There are several “Harbor Islands” in Maine, but given the details of the story this one is probably part of Phippsburg, which is approximately 17 nautical miles from Portland across the bay. This account is part of the Trefethen Collection, but the story’s transcriber is unidentified. It’s a good guess that it was a member of the Trefethen family, but we don’t know for sure.  Captain Albert Davis might be Albert C. Davis (1830-1892) who lived for a time in Phippsburg — and was married to a woman named Wealthy!

As far as we know, this story has never been published before. 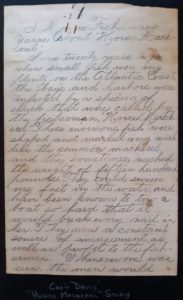 Some twenty years ago when small fish were very plenty on the Atlantic Coast, the bays and harbors were infested by a species of shark that were called by the fishermen ”Horse Mackerel.”  These enormous fish were shaped and marked very much like the common mackerel and they sometimes reached the weight of fifteen hundred pounds. They could swim very fast in the water and have been known to tow a boat so hard that it would break every nail in her.  They were a constant source of amusement, as well as profit to the fishermen. Whenever one was seen, the men would make chase, and when the opportunity arrived would harpoon him, and settle down for an exciting ride of three or four miles when the poor fish would be completely tired out and become an easy victim to their lances. The incidence which I am about to relate happened near Harbor Island on the coast of Maine in the Summer of 1860.

Captain Albert Davis was the principal actor in scene and these are his words for it, as he related it to me. When I asked him, one stormy day, if he ever caught a Horse Mackerel.

“Well, I should say I had” said he, as he reflectively pulled at his pipe. “I have caught a good many of ‘em in my day. But I would not likely to get used again, as I did once with a large one.”

“How was that, Cap” said I trying to draw the old man on.

“Well,” said he, “I will tell you about it, But I suppose that you will laugh at me for being such a fool. I was running a lobster smack at that time on the coast, and was living at Harbor Island. I had just returned home from a trip up to Portland and anchored my vessel in the harbor right in sight of home. The next day was Sunday and I thought I would go aboard in my skiff to see that everything was all right. I had just got aboard when one of the fishermen came aboard in a brand new boat that he had just bought. 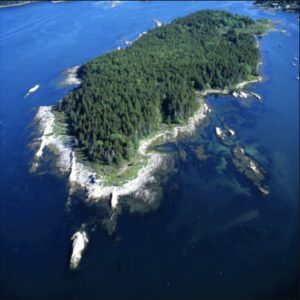 Harbor Island from the air, image courtesy of www.sebasco.com/realestate

While we was a talkin’ what should make his appearance but a Horse Mackerel a chasin’ a school of pogies. Now, thinks I, for some fun, so I said to the man in the new boat, I say, Bill, let me take your boat to go and catch that feller. No sir, says he, I guess not, I have just got this boat paid for, and if you take her you would be sure to get her smashed with all this fleet in the harbor. Oh I guess not Bill, says I. If I do I will pay you for her. What is she worth?  Well, says he, I paid $40 for her and hate to lend her.  Well, get out and if I damage her I will make it all right with you.

So down I goes into the hold and gets my line and harpoon and strike out to try and head the critter off. I chased him quite awhile before I got the chance to iron him, and when I did, it beat all the travelling you ever saw. I took a round turn with the line over the stern off the boat, and led it aft to a pin, where I took another turn, and hung on to the end. I did not dare to make the end fast for fear he would run in to some of the fleet, but he started off and followed one side of the harbor and passed all the vessels but the last one, and when we were abreast her I thought that we were going by all right, so I stooped over and made the end fast all solid, and when I looked up the cuss had turned and was going right under the vessels bottom, like lightning, and we were so near that my only chance was to jump for it. 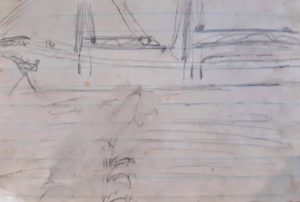 Pencil sketch of the horse mackerel diving under the boat

I gave a leap in the air and I was going so fast that my toes caught on the edge of the rail as I went in over, and I went head first and struck my head on the top-timber, way across on the other side of the vessel, stunning me and putting three of my fingers out of joint. The crew were all asleep, below, and when they heard the noise they rushed on deck and saw me lying on deck, all bruised and stunned, with no boat along side. They supposed that I had flew down from above and lit there. They brought me to in a short time, and I told them how I came there, when they had a good laugh at my expense.

So I got one of them to set me aboard of my own vessel, where I paid the man for his boat and started for home, and I have never struck a Horse Mackerel from that day to this.” 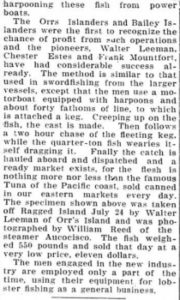