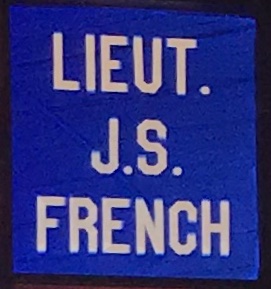 We do not know much about Lieutenant John S. French. Census information tells us that he was born around 1840 in Albion, Kennebec County, Maine, and was said to be working in Lewiston as a carpenter when he enlisted. According to the letters of his close friend, John H. Stevens, he died on November 8, 1863 at Rappahannock Station, just 23 years old. Stevens wrote home to his father after John’s death: “I cannot speak too highly of his conduct on the field or in camp. As an officer, soldier and a man, he had no superiors. In his death we all feel that we have met with a great loss – but we know that he felt like a hero.”