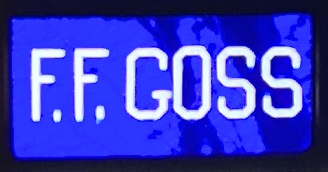 Frank F. Goss, born December 22, 1842, came from colonial stock. His great grandfather, Thomas Goss, came to Gloucester, Massachusetts from England in 1756. From Gloucester, the family moved to Old Danville, Maine (now part of Auburn, Maine). But Frank’s name doesn’t appear in the United States census until 1880, when he is listed as a 38-year old “Railroad Hand,” married to Abbie V.

Goss died on December 6, 1917 of Bright’s Disease (an term used at the time for various types of kidney disease) and his prominent obituary notes that he had served for 22 years as the street commissioner of Auburn, Maine. According to the same obituary, Goss served in the 1st Maine Regiment, 6th Corps, and was wounded at the Battle of Spotsylvania Court House in May of 1864.

Goss’ obituary goes on to say that he “served as treasurer for the 5th Maine Building Association of Peaks Island for many years.” His wife’s obituary sheds further light on his involvement, noting that her husband “served in the Civil War in the Fifth Me. Regiment, was at one time department commander of the G.A.R., and was much interested in the Fifth Me. Regimental building at Peaks Island.”