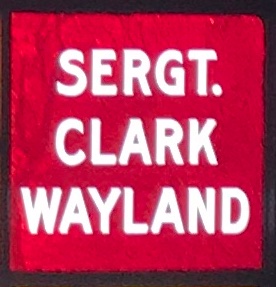 Clark Wayland was born in Canada sometime around 1846 to parents who had both emigrated from Scotland. He was not among the original enlistees in Company C. According to Bicknell’s History of the Fifth Regiment Maine Volunteers, Wayland joined the Company on August 29, 1864. He had been transferred to the 1st Maine Veterans in June of 1864, which may signify that he was wounded in battle.

By 1880, Wayland had established a home in Gorham, New Hampshire, had married a woman named Lizze A., and was working as a machinest. Though he was still living in New Hampshire in 1900, by 1910 he had moved to Portland, Maine. In 1920, he was still in Portland and was renting a home with his wife.