Civil War Reunions, “Seeing the Elephant,” and the Complexities of Reconciliation

The Fifth Maine veterans remained in close contact with one another after the Civil War, and, in 1888, built the Fifth Maine Regiment Memorial Hall as a place to spend time with one another and celebrate the simple fact that they made it through the War alive. These reunions were important to the men, and gave them a chance to reminisce with others who understood what they had experienced as soldiers. 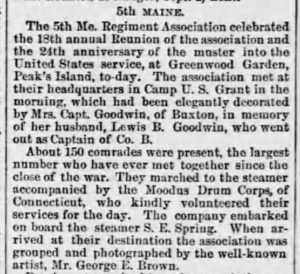 Excerpt from The National Tribune, Washington, D.C., July 2, 1885.
The Fifth Maine held reunions on Peaks Island even before they built the Memorial Hall in 1888.

The veterans spoke of “seeing the elephant,” which meant they gained experience of the world, but at a high cost.  For the men of the Fifth Maine, that cost was deadly combat. Reunions reinforced a sense of common “soldierhood.” Joint gatherings of Confederate and Union soldiers, such as at Gettysburg in 1913, in which the Fifth Maine participated, emphasized reconciliation for the common good of the country. The experience of African-Americans increasingly occupied a marginal place in the collective Civil War memory, however. The “rough edges” of slavery and the complexities of emancipation and Reconstruction were smoothed over in an attempt to emphasize unity between North and South. Predictably, these concerns continue to fester to this day. 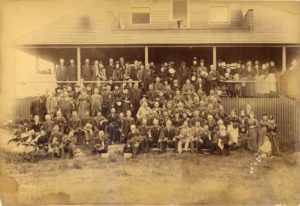 It’s not likely that these top-level issues were on the minds of the individual Fifth Maine veterans when they gathered each summer between 1867 and 1940. (The last Fifth Maine soldier died in 1938, but their families, who had actively participated in the reunions, carried on for an additional two years.) They simply wanted the comfort of spending time with those who had also “seen the elephant.” 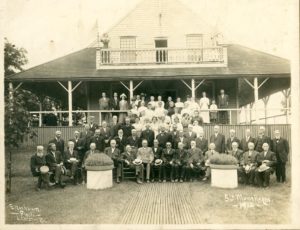